[en/dt] so, both sides of the coin now

german media fill their pages with 'news' on the presidential campaigns in the US these days, radio stations and TV likewise. so boring, and this will continue for six months more! yet if you really want to learn more about US politics i suggest you watch youtube at least once, now: barrack obama's speech at this year's white house corespondents dinner, today's piq because ascension day (himmelfahrt). he knows how to address his audience! and despite guantanamo still open, surveillance getting ever stronger, and drone attacks on civilians and terrorists hardly opposed by anybody (except 'the intercept'), this president hasn't lost his charm over the years.

now compare this to the harsh criticism of obama's speech in hannover recently, as can be read on 'nachdenkseiten'. albrecht müller has no long way to argue that this speech was pure ideology, telling just one half of the story. and he's pretty much to the point. also, as you would expect, he's not comfortable with the coverage of obama's hannover speech by the german 'leitmedien': "Dass die deutschen Medien mehrheitlich sich so haben einlullen lassen, ist ein beredtes Zeugnis ihres schlimmen Zustandes: Kampagnen-Medien, leicht käuflich von westlichen, atlantischen Ideologen. Embedded in die sogenannte westliche Welt." amen.

to turn the coin once more: don't miss the performance by comedian larry wilmore gave at the same occasion, at least not from 22:15 min on. no, that's not comparable to boehmermann, definitively not. 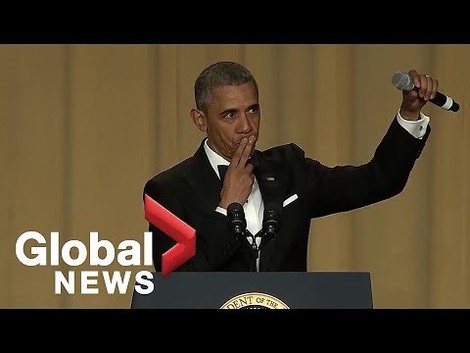